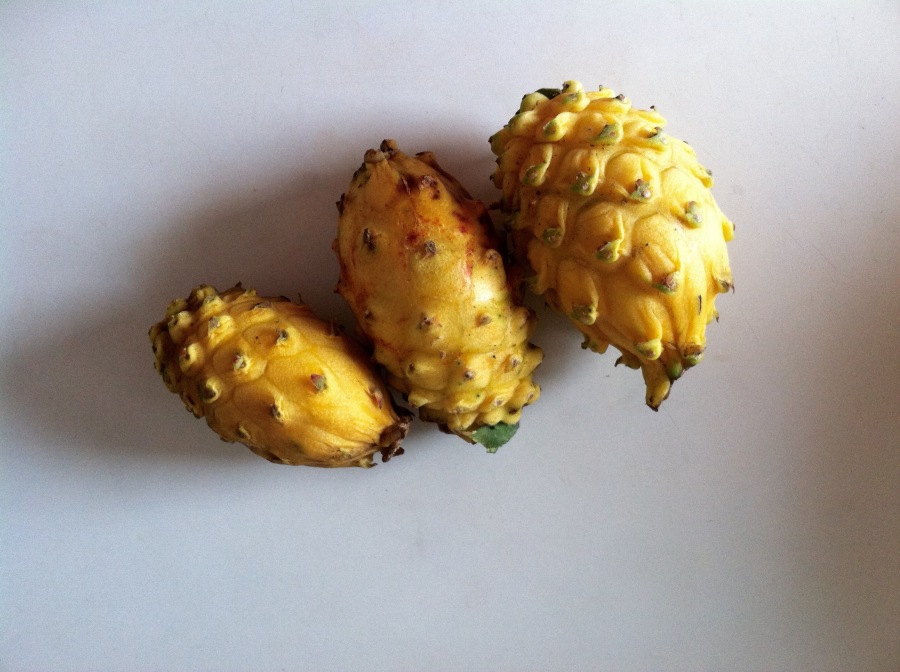 To me, the best part of Colombia’s food scene (if you can peel your eyes away from the fried cheese and sizzling street foods), is its produce. The country’s tropical climate and range of altitudes lends itself to a crazily varied list of native plants. Here’s the start of a small series introducing a few of my fruity friends. First up, pitaya.

Pitaya, or dragon fruit, might be my favorite funky-shaped produce on the western hemisphere. In Ecuador, the fruit grows inside a hot pink peel. But in Colombia, pitaya is typically smaller and bright yellow. When I first arrived to Medellin and was adjusting to the food, one of my roommates offered me pitaya, saying that it’s great for the stomach and helps with digestion.

Here’s the low-down: It’s native to Mexico, grows from a cactus, and has been traded and cultivated across the globe, namely in Asia. Pitaya is high in iron, magnesium, antioxidants, and fiber. It’s also got some Vitamin C and B-2. Not a bad way to start your day.

Cut it in half and scoop out the speckled white insides, much like you’d eat a kiwi. It’s sweet, light, and refreshing, just like Medellin’s springtime weather. (No air conditioning needed.) And much easier to slice open than a watermelon (just saying).

In Colombia, you don’t have to venture too far to find this tropical fruit in a city. Check out a local neighborhood market, where a pack of three is priced at one thousand pesos (about thirty cents). Or stop by a fruit vendor in they city’s centro, where  mamoncillos and mangos pile high on wooden push carts. Toss a few in your backpack, and your next sweet tooth craving is covered.