It’s cool. Probably nothing will happen.

Ajalpan is a neighborhing pueblo just 40 minutes outside of Tehuacán. It’s not a tourist destination. But ask anyone nearby, and they’ll agree that there’s one thing you have to do if you go: eat paletas. There’s a popsicle shop in town where the owners whip up crazy flavors in blenders and freeze them into little frozen treats. We’re talking avocado, cucumber with chile, chicharron, and mole. That’s right. Meaty popsicles. If you’re into that kind of thing.

But if you google “Ajalpan,” the outcome looks a little different than an “ice lolly,” as my UK coworkers would say. The images add up to something more like “burned alive.” That’s because in 2015, a mob of Ajalpan residents captured two tortilla salesmen, suspecting them of kidnapping locals. No arrest was made; the people took it upon themselves to burn the suspects alive, then and there. In the public square. In 2015. This isn’t some 17th-century shit we’re talking about. Of course, if you ask anyone who lives nearby, they say Ajalpan’s tranquilo. Calmada. Hace calor. As if the biggest problem anyone could have with the town is it’s dry, hot climate. But don’t worry, they’ve got popsicles for that. 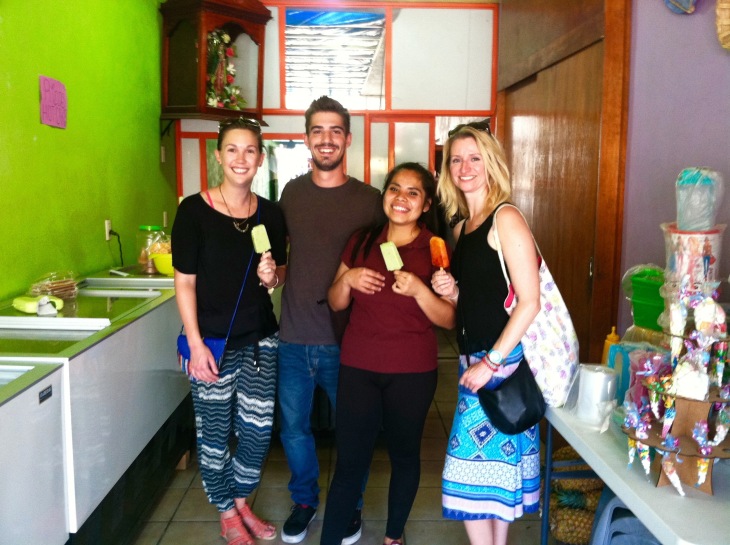 It’s easy to judge. I get that. Hello, I’m from the U.S. where we let average white guys shoot up movie theatres, shopping malls, universities, and elementary schools. And we respond with shock every time it happens, claiming we don’t know how to prevent such tragedies. Still, there’s something laughingly horrifying about a town that burns suspects alive in the central square and photographs the whole event. Tomato, tomahto? Maybe. I don’t know.

Of course, there’s a lot of shame associated with that little mishap. Although the story seems like the makings of campfire horror stories and neighborhood legends for the next generation, there’s also the detail about the salesmen actually being innocent. Completely wrongly accused. But more often than not, it’s just not talked about. And upon visiting, it really does feel tranquilo. Nothing seems to be happening. A total of two people sit in the pews in the central cathedral. Some kids play soccer in the street. A woman runs a T-shirt shop. Everyone’s at home or at work or at school in the afternoon. Nothing too crazy to report on. I’d never heard of small-town Ajalpan until I’d been in Tehuacán, anyway. And I’d never heard of Tehuacán until just over six months ago, before temporarily moving here.

It’s all relative, this idea of where it’s safe to live and teach, and where it’s not. I’m learning, despite the Internet, to take people’s word for a place. If there isn’t a single thing to do, but the town has nice trees, then I look at the trees. If someone says that I’ve got to try the pan de borro, and I don’t really feel like eating plain bread, I try it anyway. How else am I to discover that pan de borro tastes like Christmas? It’s warm, soft, and laced with cinnamon.

Ajalpan is hot, it’s true. The temperature consistently reaches about 4 degrees higher than the climate in Tehuacán on any given day. So the best way to beat the heat is to indulge in a creamy, cold paleta. Where else can I get a zucchini flavored ice lolly? You tell me.