San Cristobal is magic. That’s what everyone had said. The colonial city overflows with spirits, hot food, fog, and brisk evenings. I knew Mexico was haunted. But as it turns out, it can also be shockingly cold. Naturally, I hadn’t done my research. I’d brought shorts and one sweater.

The colonial city was built in the 16th centry. While its Spanish charm still rings loudly, navigation is easy; tourism has taken root. Streets are cobblestone and buildings are vibrant yellows, pinks, and blues. Soft celestes and whites cover chapel exteriors. Flossy blouses and embroidered house dresses stack to the ceilings of market stands. Antique huipiles run at tourist prices, each one a work of art. San Cristobal is a pueblo magico, officially– a preserved, recognized historic town in Mexico. The architecture is charming but simple: two-story buildings, arched windows, too many churches.

Upon tracking down my hostel (that’s Puerta Vieja, which I can’t recommend enough), I stopped in Doña Ame Tamales. The restaurant is located on Calle Diego Mazariegos, just three blocks from the zócalo. At 12 pesos for a café americano and 14 to 16 pesos for a tamal, it’s a cheap breakfast for a traveller’s town. They even offer vegetarian and vegan options. (I told you it was touristy).

Later in the afternoon, I took a break from Mexican food. I was thrilled to find a Salvadoran restaurant in town. It’s a mother-and-daughter run pupusa cafe. Pupusas are a traditional dish in El Salvador. To make a pupusa, you start with a ball of masa dough the size of a baseball. Then, carve out an indentation, as if you’re forming a shallow bowl or the start of a pinch pot in a middle school art class. Fill the masa dish with beans and cheese (or chicken– whatever you want), and seal up the ball again so that it’s filled like a cream puff. Flatten the ball like a thick pancake (or small tortilla) so that the filling stays inside. Fry that up on a griddle, flipping like a pancake. And then top the pupusa fresh slaw and salsas.

Although I’d eaten pupusas with my hands in the Ignacio Ellacuria community while I was visiting El Salvador five years ago, I gathered that that wasn’t so acceptable in a city. Using a fork and knife (because you’re a proper lady), slice into the pupusa, and savor the soupy black beans inside. The tangy slaw adds a contrasting flavor to the savory, creamy pupusa. It’s crazy how one meal, like a good book, can transport you to a time and a place. Like baking quesada, a Spanish cheesecake, in a Boston apartment while working (for free) for a recipe site. Or crimping Argentine-style baked empanadas in a friend’s kitchen in Texas, recreating what had been our daily lunch for six months in Buenos Aires. I might have just spent 14 hours on a bus passing through southern Mexico, yet with one bite I’m back in tropical, mountainous El Salvador. No place seems too out of reach.

Despite the obvious backpacker status, San Cristobal hasn’t lost its charm. It feels old. This is the city that Sandra Cisneros visited when she set out to write her second book, tapping away on a type writer at a secretary school, sitting beside women working toward an opportunity for escape from their present life. Employment.

I’d just taught The House on Mango Street to my 10th graders in Tehuacán. The book feels different every time I re-read it. And I chose this trip to break open Cisneros’ new nonfiction collection, A House of My Own. It’s funny to read about one of your favorite writers travelling to a place you are literally travelling to in that moment. She calls Chiapas “Mayan country” where the women where huipiles, the woven tunics that precede Colombus, and where the people smell of leña, that mix of smoke and wood. Cisneros wrote her book of poems, Loose Woman, in this town, in 1985. Thirty years later, her descriptions are picture-perfect. She describes the used, worn huipiles that are sold on side streets. “By pulling the garments inside out,” she writes, “I could read their history.” 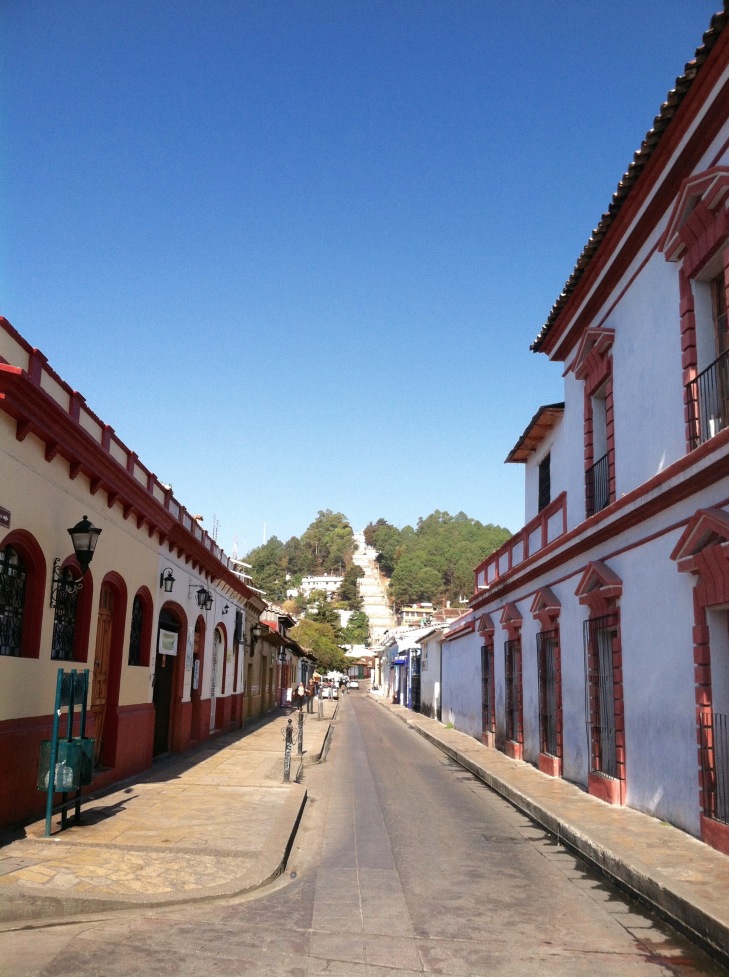 You go to San Cristobal for the stories and the adventure; the place is filled with voices. It’s the hub for daytrips to the cañón de sumidero, to the towns of chiapas del corzo and comitán de dominguez, and the breathtaking blue of the cascading water at el chiflon. But you’ll want to stay in San Cris for the way the sun beats on the golden-yellow buildings at midday and the coziness of a glass of wine and a serving of mezcal in the gauzy evening. The air is fresh, and artisans stroll the streets, arms piled with cozy blankets and tops to wrap yourself in when the daylight fades away.