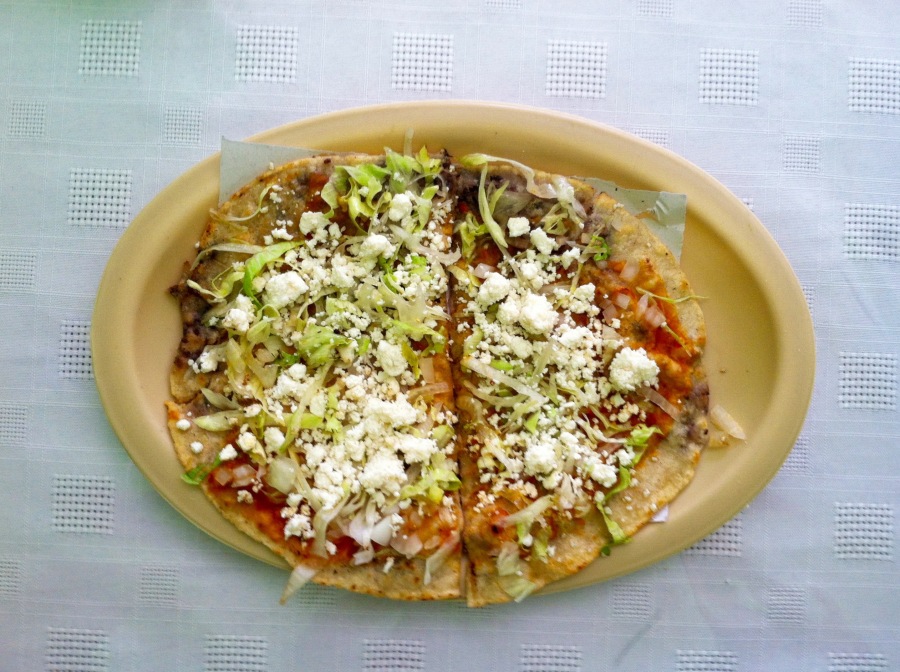 Guaraches (sometimes spelled huaraches) are totally different from memelas. Ask any local in Tehuacán, and that’s what they’ll say if you confuse the two. The two tortilla-based meals might as well be categorized as different food groups from the way people talk about their typical recipes. When it comes down to distinguishing between guaraches and memelas, the main difference lies in the assembly. The beans go on top of the memela’s tortilla, forming the base which will be topped with salsas, cheese, and onion. But there aren’t any beans on a guarache. Instead, the black beans are cooked into the masa along with tarragon or fennel for a slight licorice-like flavour in the crust. Then the guararche is topped with the same salsas, cheese, and onion as the memelas. To really mix things up, the guarache also gets a handful of lettuce sprinkled across the top.

The tortilla shape is slightly different, too. Whereas memelas, regardless of size, are always thick and round like a pancake, the guarache dough is flattened into a thin oval that is then fried to a crispy texture. But other than that, the toppings and core ingredients are the same. And the tastes? Not much different.

This is how a lot of Mexican food is in a small city in the middle of the desert. I was speaking with a student and friend who hopes to introduce a new type of cooking to her town. She’s not sure what to serve yet, but she knows it won’t be Mexican. “People like what they know,” she says. “That’s why everyone serves the same food.”

And they really do. Sure, everyone has a preference. Go down the street for the best tacos. Find the stand in the back of the market for the tastiest guaraches. And if you want to find a memela that’s larger than your face, you’ll need to ask a taxi driver to take you across town at two in the morning. But at the end of the day, it seems that everyone and their mother (and their great-aunt and second-cousin and sister-in-law and girlfriend) makes the same food. Between tacos, quesadillas, guaraches, and memelas, it all comes down to masa turned into some sort of corn tortilla, white cheese, salsas, and meat. And that’s what everyone loves to eat.

Mexican food — as with any nation’s typical dishes — varies throughout the country, region to region. And I’ve by no means tasted (or seen) any remarkable percentage of it. But seeing what everyone loves to eat on a regular basis, the routine diet is pretty straight-forward. And every lunch and dinner pairs with coca cola. Mexico does Mexican food well. That’s the point, right? But in terms of variety, it’s lacking– especially if you’re trying to stick to a vegetarian diet. I’ve been cooking more for myself rather than eating out.

Another teacher pointed out that this might be a later stage of culture shock: feeling a little bored with the culture around you. And that’s ok. It just means that anything, with time, can become the new normal.

Living abroad means trying to find the humor in the life around you. Like the flooding streets, for instance. So when it rains, the sewage water rises up into the roads. And the other week, when the local government stopped paying the garbage collectors, we watched trash pile up on the sidewalks and wash down the streets when the floods came. It all sounds a bit ridiculous, but people just go with the flow. They’ve still got to get to work, even by bike. And they’ll still make it to their local cocina economica for a warm guarache before shop closes for a late-afternoon siesta. Culture is supposed to make life comfortable for the locals, not the foreigners. And so much of Mexican food has felt and tasted exactly that way. Routine is comfortable. No matter where we go, we like what we know.