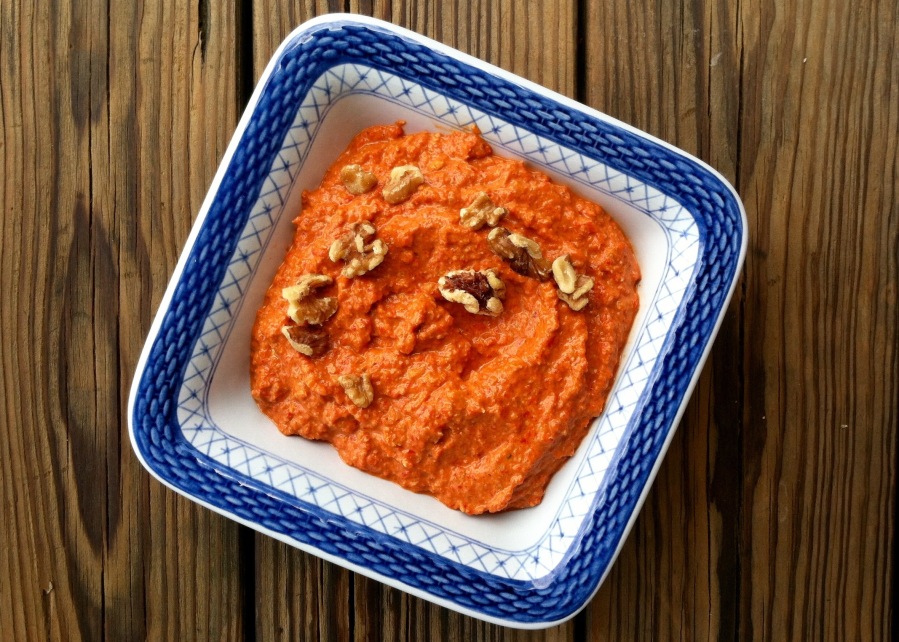 I love referencing vegan and plant-based cookbooks because I learn how to do something totally new with each recipe. In Mexico, I was definitely learning more on my feet. Like the fact that if you rub your eyes after handling and chopping jalapeños, you may have to excuse yourself to your bedroom for a solid 5-minute cry session. With this dip recipe from Sarah Britton’s My New Roots book, I learned how to slip the skins off of peppers without burning my hands too severely. Patience is a virtue, they say.

My favourite cookbooks are also full of everyday facts that make me go, SERIOUSLY, HOW DID I NOT KNOW THAT. We have this beautiful resource called The Internet, yet I still had zero clue that green bell peppers are really just premature red bell peppers.  Too much time spent watching animal videos is to blame, probably.

This nutty veggie dip is a nice autumn appetiser as your favourite fruity salsas fall out of season. And the vibrant orangey colour is unbeatable. It has a subtle smokiness from the roasted peppers and a nice texture from the walnuts. It’s not as smooth as hummus. But it’s chunky enough to stand up to some hearty crackers and chips.

Although I’ve made a cashew-based  hot pepper dip before, I like this one because it starts with simple, fresh ingredients: whole red bell peppers.

Let’s roast these peppers. Preheat the oven to 400 degrees Fahrenheit.

Coconut oil is easier to work with if it’s in liquid form. If yours has solidified, just melt it a bit first. Slice the peppers in half and leave the stems on. Then coat them in the oil and lay them flat on a baking sheet. Roast them in the oven for 10 minutes, until parts of the skin start to blacken.

Next, steam the peppers. (I know, they’re being high maintenance.) Transfer the peppers to a large bowl. Cover them with plastic so that they can steam for 10 minutes. In the meantime, add all other ingredients to a food processor. If you don’t have one, a blender will also work.

After 10 minutes, uncover the roasted/steamed peppers and let them cool for a few minutes. Once they’re not too hot to handle, use your fingers to peel off the stems and skins. They should slip off relatively easily. Discard the skins.

Lastly, add the red peppers to the food processor. Pulse until the dip’s consistency is smooth with small pieces of walnuts still visible. Top with a few extra walnuts and ground black pepper if you want to be fancy.